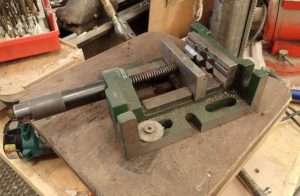 Long ago I got this drill press vise that I really like. It is a Groz UGL100-3 made in India.

My friends and students also really like this vise when they use it. They want to get one. But, until recently I had to tell them they were out of luck. I could not find anyone still selling it.

That changed recently when I found a very similar one on Zoro (www.zoro.com) made by Dayton #4CPG1.

I used this vise mostly for drilling metal things. But, I also use it for plastic pipe (often) and wooden things (not very often). 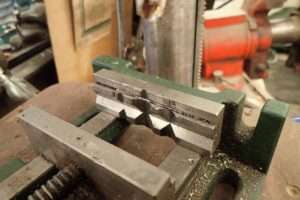 I really like this drill press vise, because it is:

1. The right size and weight.

2. It has both horizontal and vertical V slots that allow me to securely hold round stock while drilling.

3. It has a ledge at the top of the jaws that allow me to securely hold bar stock up at the top of jaws where I can see it while I drill it.

4. There is a lot of space between the "ways" on the vise. Thus I can drill all the way thru things with out hitting the ways. Note: If I don't want something to drop thru the ways then I add a crap piece of wood across the ways. 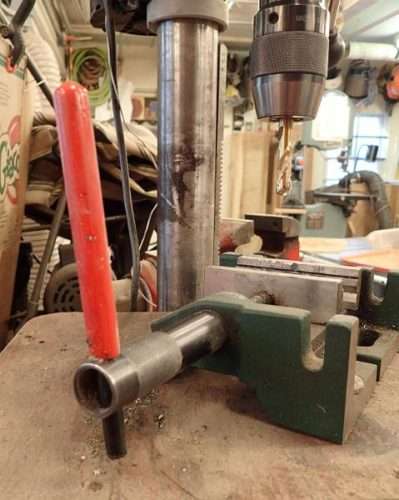 What I Did Not Like and How I Fixed It

The only thing I did not like about this vise is the handle is hard to tighten up really tignt because it does not have a cross bar (tommy bar).

The vise comes with just a small hole in the handle. See photos below of new vise at Zoro.

I solved my problem by drilling out the hole so it was large enough to take the "Red Bar" that comes with Oneway Chucks and Faceplates.

Now I really like the vise handle. For most things, just hand tight is good enough. I don't need the red bar. When I need it really tight, I get the red bar.

Note: No cross bar (tommy bar) on the vise handle means you can easily position it anywhere on the drill press table with out having to dork around with the cross bar. 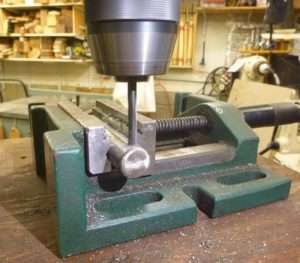 Horizontal V Slot In Use

Here is an example of the horizontal V slot in use. 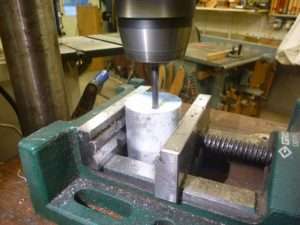 Vertical V Slot In Use

Here is an example of the vertical V slot in use.

I rarely use the vise for this. Because, I do most of this thing kind of drilling in my metal or wood lathe. But, when I need it. It is there.

Note: You can't really see the middle vertical V slot that is being used in this photo. It is to the left of the aluminum blank being drilled out. The drill press vise has 3 vertical V slots. A left one, middle one, and a right one. Only the left one is visable in the photo. Take a look at the other photos above to see all 3 slots. 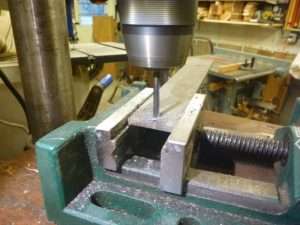 Here is an example of the ledge at the top of jaws in use.

Notice how you can drill a hole all the way thru something near the end. The work is still well supported in the middle of the vise. It does not drop thru the "ways" of the vise. 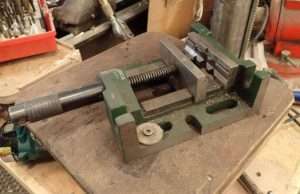 This is the same photo as above. Notice how I secure this drill press vise to my drill press table with just 1 big screw into a plywood table that fits over the cast iron table on my drill press.

I REALLY like this set up. Because, I can quickly install or remove the vise by just lifting up the plywood table.

I can also just take the whole table over to the trash can and empty any shavings into the can.

For most things 1 screw is secure enough and allows me to easily position the vice. I add a 2nd screw once in a blue moon when needed. 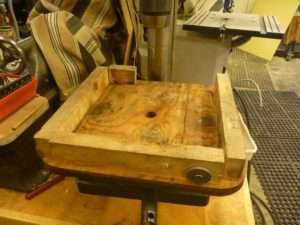 Its not pretty. But it work goods.

The boards that I attached to the bottom of the plywood hold the vise securely in place via its own weight. The boards prevent the vise and plywood from twisting out of my hand if a drill "catches". I don't need to waste time bolting the vise down each time I use it.

Note: There is no little board in the back right hand corner. It split on me and broke off. Maybe some day, I will replace it. But, I doubt it. 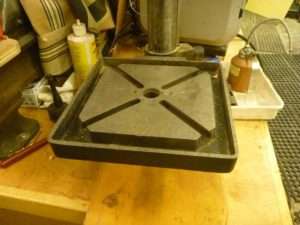 Here is what my raw drill press table looks like.

Thus the boards on the bottom of the plywood table just fit over the square table.

If I had a round table, I would do the same thing. I would leave a board sticking down where the table connects to the main drill press post. This would stop plywood rotation on the round table. 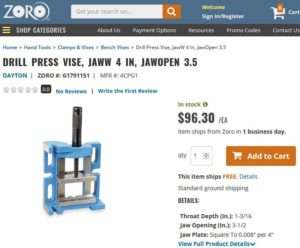 This one is very similar (the same?) as the Groz UG100-3 drill press vice I have. 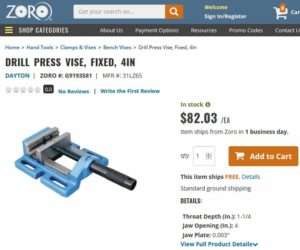 If I had it to do again, I might get this one. It is very similar to Dayton 4CPG1 horizontal and vertical drill press vice. But, it is a little less money and I never use my vice in vertical mode.

Dayton also makes a similar looking 31LZ68 vise. It is green. I don't like the looks of that one. It only has one set of vertical V slots. The horizontal V slot looks to high to me. It also does not have a ledge at the top of the jaws. 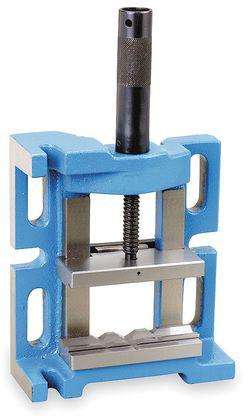 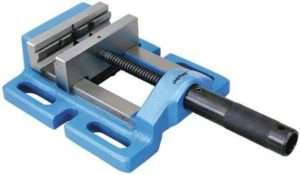 Dayton also makes a similar looking 31LZ68 vise. It is green. I don't like the looks of that one. It only has one set of vertical V slots. The horizontal V slot looks to high to me. It also does not have a ledge at the top of the jaws.

Life's Too Short To Use Crappy Tools!